Dioclesian, music by Henry Purcell and text adapted by Thomas Betterton from Fletcher and Massinger, was first performed in 1690 in London's Dorset Garden theatre, usually known at that time as The Queen's Theatre. Thomas Betterton, actor/manager of the United Company was also in charge of the staging, in collaboration with the choreographer Josiah Priest.

The opera we call Dioclesian is officially named The Prophetess, or: The History of Dioclesian, and was referred to as The Prophetess during the seventeenth century. It became so popular, that it was singled out for performance when VIP's like the Russian czar came to London. It was revived from time to time (at least the most spectacular scenes were) during the entire eighteenth century, sometimes with music by another composer. That was due to the staging, particularly that of the final masque, which was sometimes performed as a separate scene in combination with a totally different piece, such as a play.

We have a page and a half of stage directions, giving us detailed information on the staging of the masque, which even includes the colours. Above the stage we see a machine, a term used in baroque theatre usually signifying the vehicle in which gods and other supernatural characters arrived. This could be a chariot or for instance a cloud or a shell. In this case the machine consists of four “palaces” in the clouds.

The stage directions show us that the singers are on the stage floor and all the dancers, except the first two, enter the machine. The adults are in front, the teenagers behind them and the children at the back. This was obviously meant to enhance the perspective effect even more.

First to appear is Cupid, descending from the flies as is fitting for a character traditionally furnished with wings, as is Mercury for instance. Supported by an invisible chorus he calls upon all the fauns, nymphs, naiades and gods of the rivers and woods to appear. The first to come are a sylvan and a follower of Bacchus, who tell us that today we are celebrating the victory of the god of love.

Right after their duet, the scene changes to four palaces, actually four tiered mini-stages, for Flora, Pomona, Bacchus and the Sun, in that order. At the same time a view of a palace with a beautiful garden rises from under the stage.1 Six orange trees in vases also appear, which tells us that the masque is not just performed to celebrate the happy ending, but also to honour William III, who himself used orange trees to symbolise the House of Orange. Two years later they appeared again in the finale to The Fairy Queen at which time Queen Mary was honoured as well: this time the vases were made of “Chinese porcelain” in reference to her collection.
William, who was away in Ireland fighting the Jacobites at the time of the premiere, was also criticised in John Dryden's 2 prologue to the opera, which was prohibited after the first night.

It is not clear from the stage directions to Dioclesian that the orange trees are three-dimensional, but The Fairy Queen shows that they were, as does “six orange trees in large vases” found in a theatre inventory of the period. 3
In our reconstruction, the backdrop of the garden with the palace is based on a painting by Robert Robinson called the Dutch Garden”, which although it has very un-Dutch hills and pine trees, does have a fountain and a large manor which, with a little imagination, might be taken for a Dutch one. We know that Robert Robinson painted for the theatre.

The palace of the sun contains a throne. The stage directions do not tell us if there is anyone on it. Like Louis XIV, William III was associated with the sun, but in the stage directions it says that two children are dancing on the uppermost stage. As the masque concludes with the words “Triumph, victorious Love” it seems more appropriate to put one of the children on the throne.

The animation includes only the first eight minutes of the scene, which has forty-five minutes of music: from the descent of Cupid to the entry of a “Hero” and a “Heroine”. 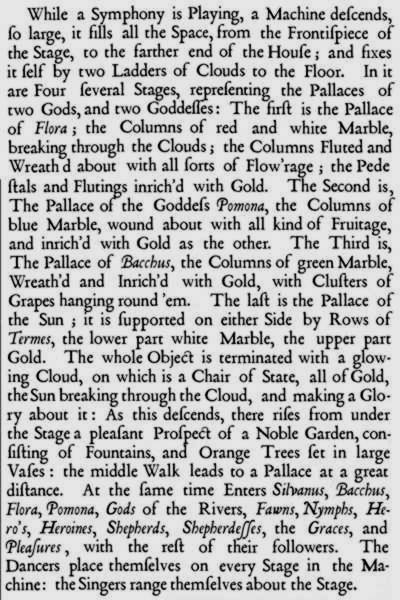 Stage directions in the 1690 libretto.

1. Presumably painted on canvas on a roller. ↩

2. England's first Poet Laureate, who lost the title under the new monarchy.↩

3. The Tatler, No. 42, 16 July 1709. The inventory of the Drury Lane theatre, offered for sale after the forced closing. A spoof, but including many authentic details (see also our page Purcell, Handel and their Times, Chapter The Silencing of Drury Lane).↩