Henry Purcell's Fairy Queen has more masques than his two preceding semi-operas, Dioclesian and King Arthur.
This final masque is introduced by Oberon. It is called the Chinese Garden. Why Chinese? Just because Chinoiserie was fashionable in late 17th-century England? We think there was more to it.

The hanging garden which appears above the Chinese garden is a tribute to King William III and refers to his involvement with baroque gardens and to the exotic birds and monkeys which he kept in those gardens. There is a portrait of the menagery by Melchior d´Hondecoeter. The Monkey Dance in this masque is a reference to the menagery.
The Chinese garden is a tribute to Queen Mary II. It is a reference to her famous collection of Chinese porcelain and Delftware. Many of the pieces had been gifts from the Dutch East India Company, while she was still living in the Dutch Palace Het Loo. In England too, she had a large collection.

The purpose of the highly specific stage directions becomes particularly clear in the last scene of the masque, when Hymen, the god of marriage, has sung his complaint about love that does not last. His torch has long been out. Two Chinese women direct Hymen's attention to “six large Vases of Porcelain, in which are six China-Orange-trees”. They have risen from under the stage and moved forward, probably by children hidden in the pedestals. Hymen is satisfied. His torch will shine and he will be flying again. That this specifically refers to the monarchs becomes obvious if you know that the premiere took place shortly before their fifteenth anniversary. It is clear that William and Mary are symbolised here as a shining example to the newly wed couples at the end of A Midsummer Night's Dream.

Presumably most of the actors were wearing costumes based on French court fashion, as usual. However we assume that the Chinese characters did look exotic. A book about China owned by Betterton has a picture of North Chinese dress from the province of Xansi. Xansi is also the name given to one of the Chinese women in this scene.

The reconstruction is necessarily speculative, but the elements on which it is based were all known to the makers of the opera.

The whole scene from this point to the end of the opera lasts twenty-five minutes, far too long for an animation which is only meant to show the stage picture and the scene changes. So we cut most of the repeats and dropped some numbers completely.

On stage from left to right we see: Oberon, Titania, Robin Goodfellow (a hobgoblin, traditionally a rough and hairy character), and two of the human figures from the original Midsummer Night's Dream, the Duke and Egeus. Oberon and Titania are smaller than the others, because they are played by children. Thanks to a letter, found recently and written by somebody who was present at one of these performances, we know that Titania and Oberon were played by eight and nine-year-olds and we think that it is very likely that more fairies were played by children.1 This of course puts many scenes in a totally different perspective.

The masque is about to begin. Juno has just left, in her chariot drawn by peacocks, and Oberon commands Robin to “bring thick darkness all around”, which should not be taken literally. A complete blackout was not possible, but the stage could be darkened, enough to lend some credibility to Oberon's command: the lights on the stage and above the forestage were dimmed, but - as usual - not the ones over the auditorium,

so in contrast the scenic stage will have seemed to be darker than it actually was. And of course the stage should never be too dark for the audience to watch the preparation of the new scene. The scene change was always an important part of the show. A dance is performed on the forestage, while the new scene is being prepared behind it... 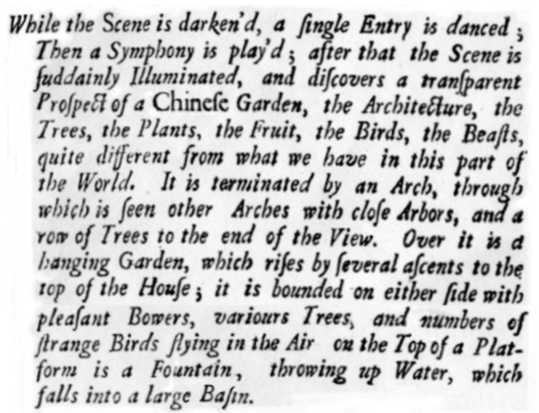